MMCA Hyundai Motor Series, hosted by the MMCA and sponsored by Hyundai Motor Company, is a ten-year art project that organizes an annual exhibition of established artists. This project aims to introduce the current state of Korean contemporary art and its dynamic practices to a wide range of audiences. 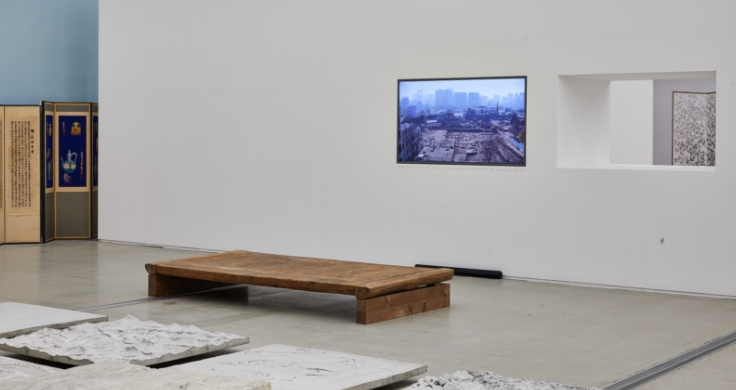 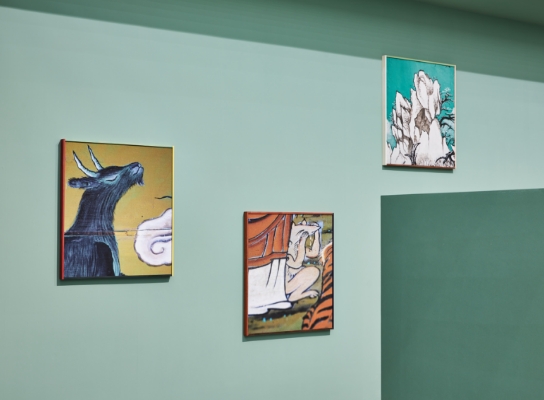 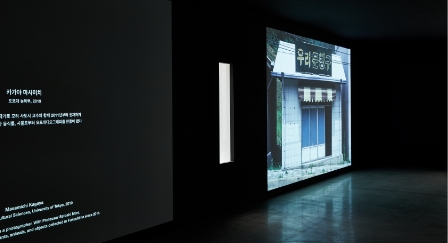 Starting from Lee Bul, selected in the inaugural year of 2014, the series has features the artists Ahn Kyuchul (2015), Kimsooja (2016), Im Heung-soon(2017), Choi Jeong Hwa(2018) to much acclaim, reinforcing their presence in Korean and international art scenes.

The artist for the 6th annual MMCA Hyundai Motor Series 2019, Park Chan-kyong, had long contemplated on the meaning of “community” in a unique manner while thoroughly researching the theme, systematically. Being active as well as a critic, film director, curator, and photographer, the artist had also shown excellence in various fields such as creating an artist duo PARKing CHANce with film director Park Chan-wook.

In MMCA Hyundai Motor Series 2019: Park Chan-kyong – Gathering, held from October 26, 2019 to February 23, 2020, the artist’s distinct aesthetics and unique approach are displayed within the entire narrative. The exhibition is divided into 6 areas which portray forgotten stories of the past, socially sensitive topics, or hidden stories, through witty perspectives. As the works voice themselves differently, they are linked into a single context. Such a harmonious scene is quite similar with the image of the society we create via our lives or various encounters.

“Gathering-pleasure” : the value of community
of non-benefit and non-purpose.

The present exhibition titled Gathering showcases Park’s representative work Belated Bosal, eight new works include Small Museum of Art; Fukushima, Autoradiography; Barefoot, Gallery 5 and so forth, along with one existing work, Sets. The exhibition takes on the Structure of a mise en abyme frame narrative. Installed near the entrance is Small Museum of Art, which functions as the exhibition’s self-reflective frame. The work raises the question as to whether or not our familiarity with art history and museums stems from an artificially indoctrinated framework. Park continues his critique and contemplation of art institutions in works touching upon the Fukushima nuclear disaster, Siddhartha Gautama’s nirvana, and others created under the theme “Post-Disaster.” 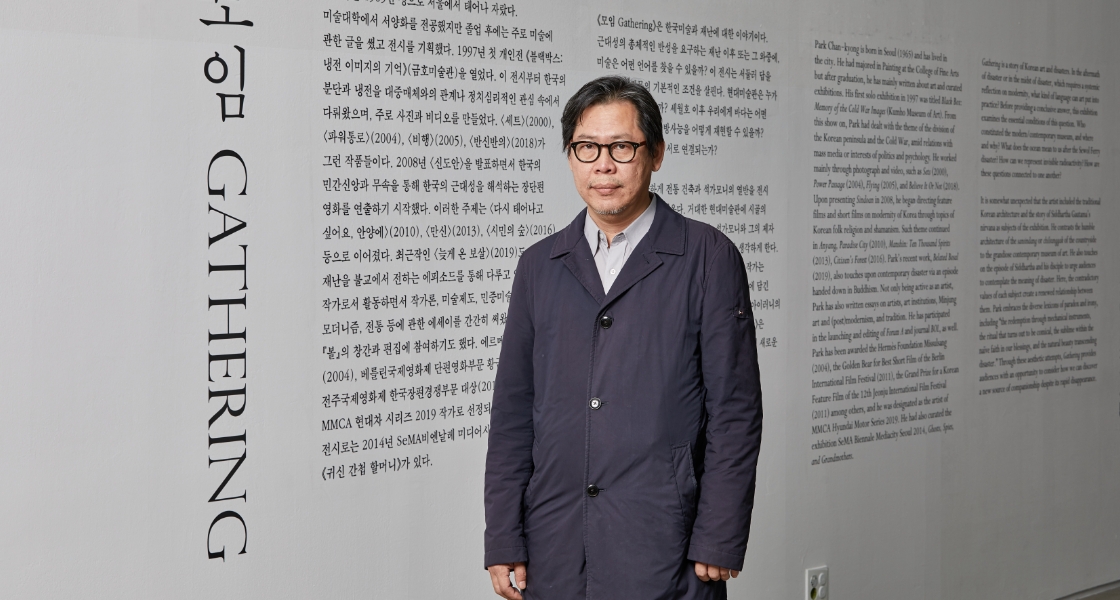 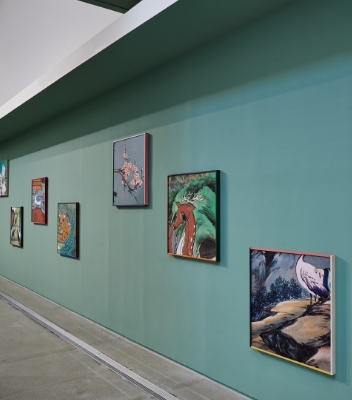 Park Chan-kyong is an artist who has attracted the attention of the domestic and international art world for his work on film, installations, and photography with the theme of Cold War, divison of Korea, folk religion, and modernity of East Asia. Park Chan-kyong is born in Seoul 1965) and has lived in the city. He had majored in Painting at the College of Fine Arts but after graduation, he has mainly written about art and curated exhibitions. His first solo exhibition in 1997 was titled Black Box: Memory of the Cold War Images. From this show on, Park had dealt with the theme of the division of the Korean peninsula and the Cold War, amid relations with mass media or interests of politics and psychology. He worked mainly through photograph and video, such as Sets (2000), Power Passage (2004), Flying (2005), and Believe It Or Not (2018). 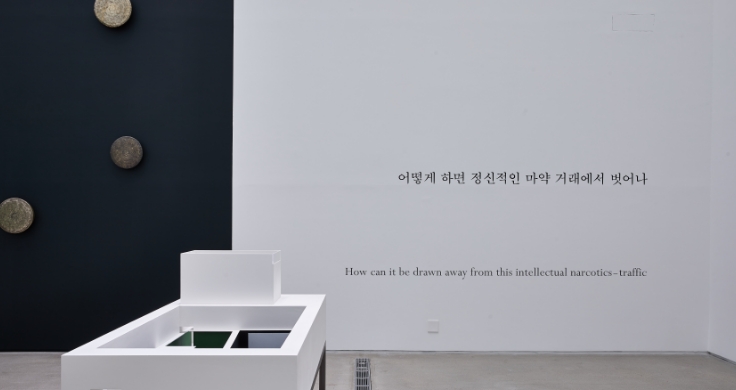 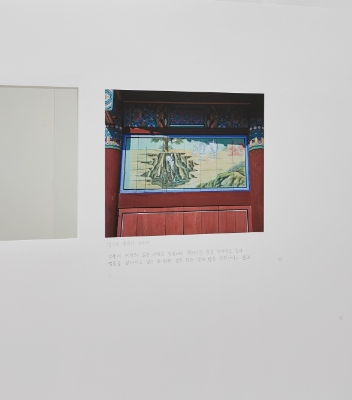 Upon presenting Sindoan in 2008, he began directing feature films and short films on modernity of Korea through topics of Korean folk religion and shamanism. Such theme continued in Anyang, Paradise City (2010), Manshin: Ten Thousand Spirits (2013), Citizen’s Forest (2016). Not only being active as an artist, Park has also written essays on artists, art institutions, Minjung art, modernism, post-modernism and tradition. Park has been awarded the Hermès Foundation Missulsang (2004), the Golden Bear for Best Short Film of the Berlin International Film Festival 2011). He had also curated the exhibition SeMA Biennale Mediacity Seoul 2014, Ghosts, Spies, and Grandmothers.

For me, such naïve stories are possible only in art; thus, the “museum,” with quotation marks, could probably be one of the few places of hope that remains in today’s world.

After viewing the exhibition, visitors are able to reflect on their history once again, and finally reflect on their own lives through various voices of the society people live in. Hyundai Motor hopes to broaden the horizon of Korean contemporary art by presenting Park’s new works ‘Gathering’ that engage in deep-researching discourse while traversing media and genres. 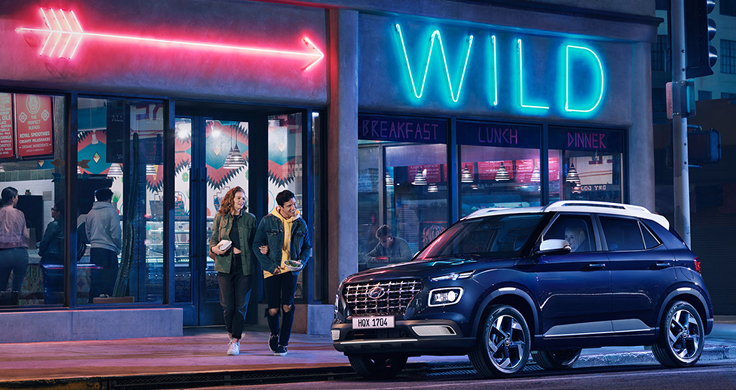 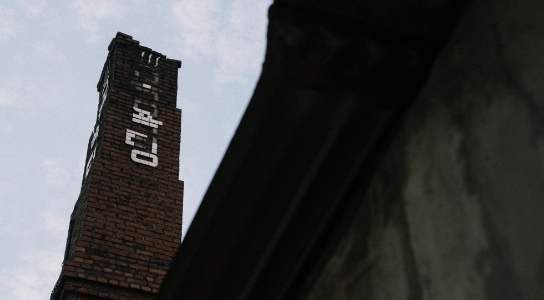 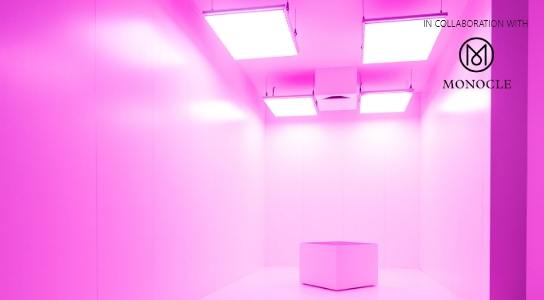