Seoul, Korea, August 14, 2012 - Hyundai Motor Company today announced that two of its most exciting vehicle models made their debut on one of the most popular mobile racing games, Asphalt 7: Heat, on iOS and Android smartphones/tablets, to give customers the chance to experience the Hyundai brand in the palm of their hands.

Starting this month, players can find both the Veloster Turbo and Genesis Coupe in Gameloft’s best-selling mobile racing game, Asphalt 7: Heat, as they were added to the lineup of 60 other high-performance cars from the world’s premium automakers.

Gameloft, a leading global publisher of digital and social games, released the lastest installment to its famed Asphalt series in June, while Hyundai is featured in the new update. The collaboration syncs up perfectly with Hyundai’s ‘Modern Premium’ brand direction as it strives to use Hyundai innovation to give customers experiences above and beyond their expectations.

Known for its dynamic gameplay and high-quality graphics, Gameloft’s Asphalt series has been downloaded more than 50 million times since its launch. Asphalt 7: Heat is an adrenaline-fueled car-racing game where players compete in ruthless showdowns at breakneck speeds across the world.

The Hyundai Veloster Turbo and Genesis Coupe are popular with younger drivers, thanks to their aggressive, head-turning styling and fun-to-drive performance. The Veloster Turbo, which debuted at the 2012 North American International Auto Show, is a car that best conveys Hyundai’s new thinking. The vehicle, featuring an innovative three-door coupe design with the functionality of a hatch, comes with a 204ps turbocharged engine. The facelifted Genesis Coupe, Hyundai’s first rear-wheel drive sports coupe, recently starred in its own buzzworthy online film, “Genesis Coupe Versus An Arrow,” outrunning an arrow shot by a world-class archer. The Genesis Coupe packs 347ps of pavement-shredding power.

Through this partnership, Hyundai will accelerate its mobile game marketing to enhance its overall brand image. In addition to the Asphalt 7: Heat brand intigration, Hyundai and Gameloft are also launching an exclusive and dedicated version of GT Racing: Motor Academy on Android, where players can find the brand’s futuristic i-oniq concept car along with the Genesis Coupe available in the game. In an effort to strengthen its game marketing, Hyundai is also collaborating with Gameloft to plan an assortment of special events in the second half of this year, with Hyundai subsidiaries preparing region-specific marketing programs as well.

“We hope this project with Gameloft will give the young generation, as well as Hyundai’s current customers, an opportunity to experience the Hyundai brand,” said Wonhong Cho, Chief Marketing Officer for Hyundai Motor. “Hyundai will continue to offer ‘Modern Premium’ values to future customers through brilliant marketing activities.”

“We are thrilled to be partnering with Hyundai to offer our fans, and those of the iconic brand, an even bigger selection of vehicles in our already rich catalog of 60 available cars for Asphalt 7: Heat and to let players drive the famous i-oniq concept car in GT Racing: Motor Academy,” said Alexandre Tan, Business Development Director at Gameloft.

About Hyundai Motor
Established in 1967, Hyundai Motor Co. has grown into the Hyundai Motor Group, with more than two dozen auto-related subsidiaries and affiliates. Hyundai Motor -- which has six manufacturing bases outside of South Korea including the U.S., China, India, Russia, Turkey and the Czech Republic -- sold 4.06 million vehicles globally in 2011. Hyundai Motor, which employs over 80,000 worldwide, offers a full line-up of products including small to large passenger vehicles, SUVs and commercial vehicles. Further information about Hyundai Motor and its products is available at www.hyundai.com.

About Gameloft:
A leading global publisher of digital and social games, Gameloft® has established itself as one of the top innovators in its field since 2000. Gameloft creates games for all digital platforms, including mobile phones, smartphones and tablets (including Apple® iOS and Android® devices), set-top boxes, connected TVs and consoles. Gameloft operates its own established franchises such as Asphalt®, Real Football®, Modern Combat, and N.O.V.A.: Near Orbit Vanguard Alliance®, and also partners with major rights holders including Marvel®, Hasbro®, FOX®, Mattel® and Ferrari®. Gameloft is present on all continents, distributes its games in over 100 countries and employs over 5,000 developers. Gameloft is listed on the Paris Stock Exchange (ISIN: FR0000079600, Bloomberg: GFT FP, Reuters: GLFT.PA). Gameloft’s sponsored Level 1 ADR (ticker: GLOFY) is traded OTC in the US. 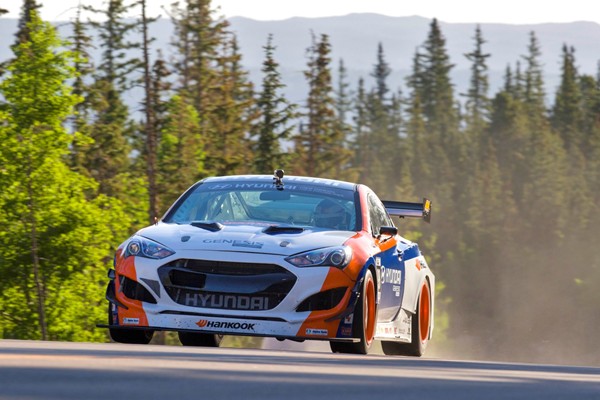 Genesis Hurricane Sc To Create A Storm At 2011 Sema Show