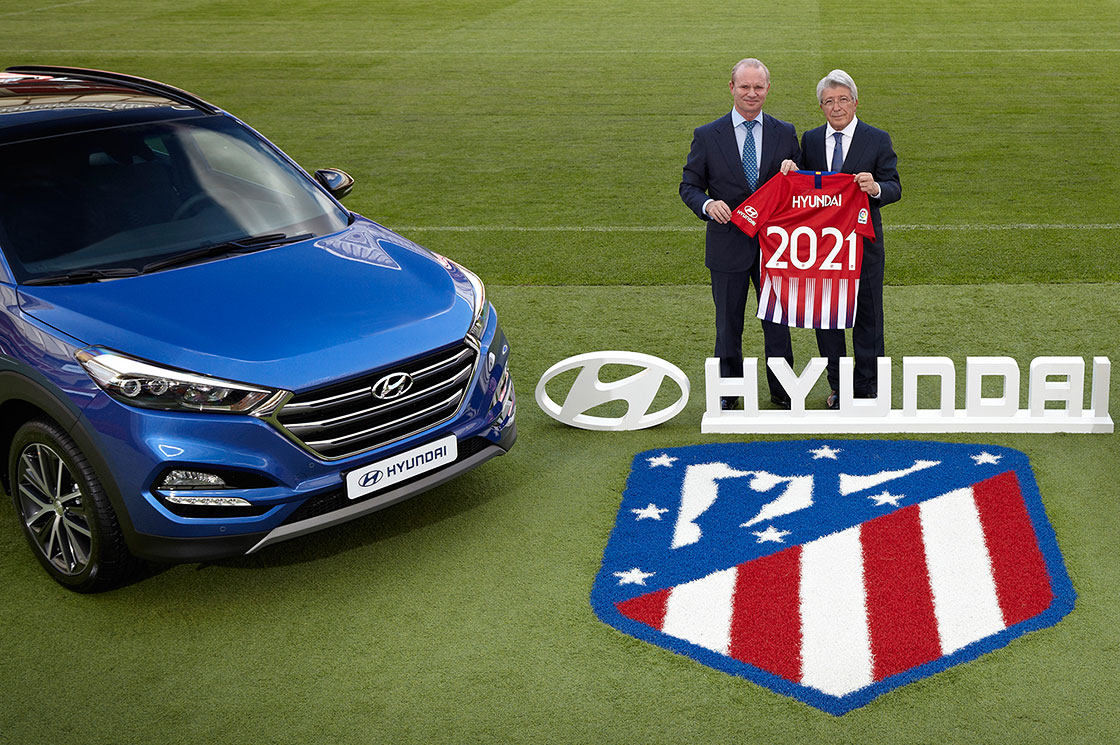 It is the first time that Hyundai has established such a partnership in the Spanish football market and it is the second new agreement establishing a sleeve presence for Hyundai, following the recently-announced partnership with Chelsea FC of the English Premier League.

With this partnership, Hyundai will not only be visible on the jersey but also through a fleet of Hyundai cars provided to the club, a home matchday presence including LED perimeter branding, and various media and digital content rights.

Over the course of the partnership, Hyundai will work closely with Atlético to create a range of exciting initiatives and valuable benefits for the club’s fans, aiming to bring ease to mobility and make football more accessible to fans.

With this latest announcement, Hyundai further extends its long-standing presence in football at the highest level, having been continuously engaged in national and international competitions for the last 20 years.

“We are incredibly excited to begin a new partnership with Atlético de Madrid – a hugely successful club with a passionate fanbase that matches the global scale and challenging spirit of Hyundai. It will be a privilege to work with the club to develop activities that place their fans at the heart of our engagement, just as we place our customers at the centre of all our programmes. Along with our existing partnership with Olympique Lyonnais and our recently-announced partnership with Chelsea, this is a fantastic next step in our new pan-European partnership approach that will include other top clubs in Europe.”

“At Atlético de Madrid we are delighted and proud of the alliance that we are signing today with Hyundai. We join Hyundai, a company that stands out for its desire to excel and its pursuit of excellence to remain at the forefront of technology and innovation. We are confident that the two companies will share and enjoy the good times, that with effort, work and dedication, we will experience in the coming years.”

Hyundai has been a FIFA Top Partner since 1999, was engaged with UEFA for 18 years to 2017, and remains heavily involved with national teams as well as individual clubs in many countries, including Olympique Lyonnais in France and, from next season, Chelsea FC in the UK.

Established in 1967, Hyundai Motor Company is committed to becoming a lifetime partner in automobiles and beyond with its range of world-class vehicles and mobility services offered available in more than 200 countries. Employing more than 110,000 employees worldwide, Hyundai sold more than 4.5 million vehicles globally. Hyundai Motor Company continues to enhance its product line-up with vehicles that are helping to build solutions for a more sustainable future, such as NEXO – the world’s first dedicated hydrogen-powered SUV. In 2018 the company revealed its new design philosophy ‘Sensuous Sportiness’, which will be embodied by all upcoming Hyundai vehicles.

More information about Hyundai Motor Company and its products can be found at: